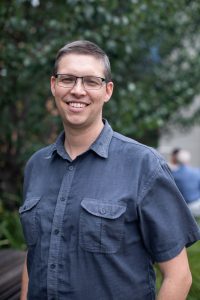 Chris grew up in Wagga in a Christian family and has trusted in Jesus’ death and resurrection since a very young age. He moved to Sydney at 18 for university, where he grew greatly in his understanding of the Bible and confidence in its reliability and sufficiency. In 2008, during a year working in SE Asia, Chris joined an English-speaking church and very quickly found himself taking on significant responsibilities, which raised the question of whether he should be more involved in Christian leadership at home. In conversation with members of that church and his minister back in Sydney, he decided to study at Moore College in 2011, and was ordained as an Anglican Minister in 2015. Chris enjoys board games, cricket, and spending time with Susan and their kids. Together with his family, he attends St Matts Anglican Church in Ashbury.

Family: Chris is married to Susan and they have five children: Asher, Bethany, Lydia, Clara, and Eleanor.