So when the crowd came together, Pilate asked them “Which one do you want me to set free, Barabbas or Jesus?” Some of the Kindergarten students yelled out, “Jesus! He’s done nothing wrong!” When the crowds called for Barabbas to be set free, the students cried out “No!!!”. 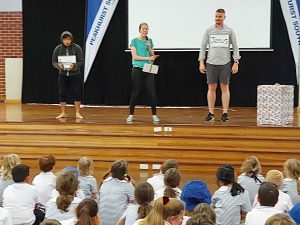 The story of Jesus and Barabbas clearly had an impact on these students at Peakhurst South Public School. It was a wonderful opportunity at the Easter Assembly to share how Jesus similarly takes the punishment for us, and how this forgiveness is a gift we don’t deserve. We also had lots of fun with them singing songs and learning a memory verse. 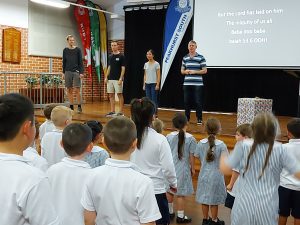 Please be praying for the 80 students who heard the Gospel message, most of whom are from non-Christian homes. Pray that they would accept the gift of forgiveness by saying sorry to God, asking for forgiveness, and thanking Jesus for what he has done.

In the afternoon we were sent 2 by 2 with maps in hand around the streets of Peakhurst. With every knock there was nervous anticipation. Would they be home? How will they respond? There were a number of good conversations, and most people were happy to take the Easter Event fliers. We chatted to Dave who said he’d never read the bible before and was happy to take a Gospel of Luke to read. While we were on the front porch of another house further up a car pulled up and a guy called out to us. I braced myself, thinking he was angry with us for being on his property. But he said, “Hey can I have one of those fliers too? And one of the Gospels?” That was certainly a surprise! It turns out he was a cousin of Dave who we had spoken to earlier. 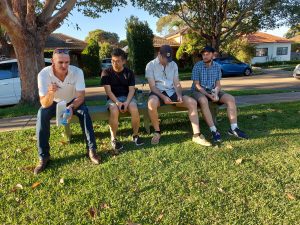 Thank God for how He works in unexpected ways. Pray that both Dave and his cousin would read the Gospel of Luke and put their faith in Jesus. Pray for others who showed interest, that they would in fact come along to an Easter event. Pray for those who showed disinterest, that God would slowly be softening their heart.

To keep in your prayers: