Today, 25 March 2021, the Most Rev. Glenn N. Davies retires as Archbishop of Sydney and consequently as President of the Moore College Governing Board. Glenn’s involvement with Moore College stretches back over four decades. After four years of theological study at Westminster Theological Seminary in Philadelphia, he completed his theological preparation for ministry with a year at Moore College in 1980. He returned to the College in 1983, when he was appointed a junior lecturer by Dr D. B. Knox. During that time, he taught the current Principal a number of subjects including Biblical Set Books, Hebrew and the Book of Deuteronomy. 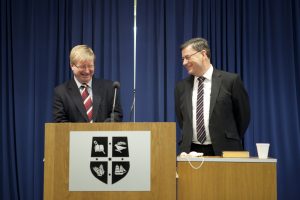 After three years studying for his PhD in New Testament at the University of Sheffield, Glenn returned to the College in 1988 to lecture in New Testament and to serve for some time as the College Registrar. In 1995 Glenn resigned from the Faculty to become the Rector of St Luke’s at Miranda (1995–2001), Bishop of North Sydney (2001–2013) and then Archbishop of Sydney (2013–2021). However, during that time he served on the Moore College Council and later the Governing Board, first as a member (1999–2013) and then as its President (2013–2021).

The College has benefitted greatly from Glenn’s lengthy association with it. His deep understanding of, and commitment to, the College’s mission has meant that he has been a source of great encouragement to successive principals. Glenn’s wife Di, a faithful prayer supporter of the College throughout that time, has likewise been a strong support and encouragement to successive principals’ wives. Their continued interest in the students, the faculty and the staff has been remarkable and greatly valued. 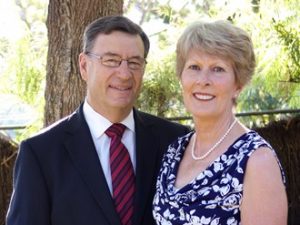 Glenn’s faithfulness in his service of God’s people and his example of patient, steady, obedient Christian discipleship has been a great blessing far beyond the College. His wise and godly leadership in a variety of spheres has been remarked upon by Christians, as well as by those in the wider community, time and again. His resolute stand for biblical truth, always taken with graciousness towards those with whom he disagrees, has been exemplary. His prayerfulness and gentle pastoral care is a treasured memory for many. He has been not only a pastor, biblical scholar, theologian and leader but he has at each point imitated Christ and drawn our attention to him.

Today we give thanks for Glenn and his ministry and for the many ways in which he has promoted, defended and helped to guide the work of the College. He has taken every opportunity to draw attention to the importance of that work and to commend it to others. We are very grateful and look forward to his continued involvement with the College, albeit in a different capacity.