As Friday kicked off, the Liverpool South team continued spending time in Luke 10, as we reflected further on what it looks like to be a disciple of Jesus. Following this, the team was provided with further training from Assistant Minister Matt Bales. Over the course of the week, the team has been equipped to speak with a great variety of people and cultural groups, as well as religious and spiritual backgrounds, with today’s focus on reaching people with a succinct sharing of our testimony, alongside Bible stories.

Having practised and prayed, the Liverpool South team then undertook the task of going to the main shopping strips of Liverpool to specifically have conversations with those who were clearly religious or spiritual. Split into threes and fours, many of our groups managed to have some initial dialogue with palm readers, often from a Hindu background, who emphasised a belief that centred on worshipping all ‘gods’, including Jesus. This presented an interesting challenge for our team members, who sought to be gracious and hear and learn from those they interacted with, whilst also presenting the exclusive truth of the gospel, of the Lord Jesus as the only way to the Father. Some of our team members also managed to play some chess with Iraqi-background locals, Mandaeans, a religion that centres on teachings alleged to stem from John the Baptist. 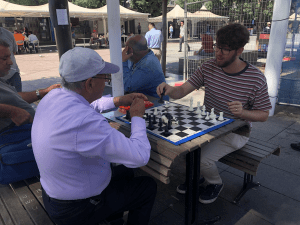 After a late lunch, some of the team continued working on preparing for upcoming talks and ministries, whilst others were trained in how to move evangelistic conversations along from initial introductions and observations of religious beliefs to more meaningful discussions about how sin and the debt owed by humans can be dealt with, so as to allow a relationship with God. The training provided was especially in the context of reaching Muslims with the gospel, demonstrating the differences that exist in the two faiths and the nature of salvation and righteousness. This led to further doorknocking efforts, where two of our team members, Stuart and Anna, were able to spend time in two homes, having extended chats with those who felt particularly isolated from society.

Finally, in the evening, our team was split up into several different ministry opportunities: for some team members, they were treated to dinners with church families; for most of our women, they were a part of a Women’s Bible study for south Indian women at Liverpool South Anglican, where they led the women in Philippians 4. The rest of the team served the church’s youth group, which was a delight, as the students were challenged to grapple with the parable of the Pharisee and the tax collector. A particular highlight of the youth group was seeing the eleven students coming to terms with the reality that we can only be right with God when we trust fully and completely in Jesus, acknowledging our sin and asking for forgiveness – rather than on our own actions. Further to this, the students were in awe at the nerf-gun, laser-tag-style battle, complete with smoke machine, obstacles and Simon Gillham showing some real talent! 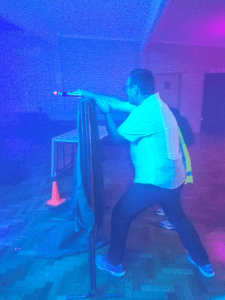 Overall, we are grateful that God was at work in so many conversations and gospel opportunities, where Jesus was proclaimed to people from all backgrounds, ages, cultures and walks of life.
Read more . . .