Energy levels were low for students after several long days at Moore mission. But despite (or perhaps because of?) our tiredness, God graciously chose to work all the more obvious in two examples from today. 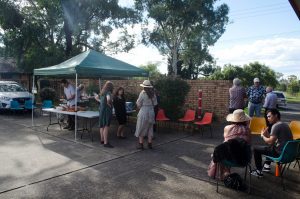 First, although our original plan to visit the mosque in Liverpool was cancelled, we were welcomed to a private audience with the Sheikh and a number of regular members instead of today. Our hosts were kind in sharing their beliefs and answering a number of our questions. In the end, we offered the Sheikh an Arabic copy of the Bible as a small gift—a gift which he received gladly as this was exactly what he had been searching for to buy! 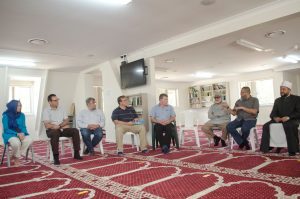 Second, we had invited a local man to join us at the community barbeque this afternoon while door-knocking yesterday (he had invited us in for a chat and we were able to listen and pray for him). This particular gentleman had had a rough 12 months, and we were very much hoping and praying that he would attend the barbeque. The afternoon came and as the barbeque was getting underway, we saw the man walking down the road towards the church. As he approached, we walked out to greet and welcome him. It turns out he had forgotten about the barbeque and was walking past on his way to the shops! He decided to come in and joined us for over two hours, over which time we were able to hear more of his story, share multiple testimonies, and share the good news of the gospel with him. We also invited him to join us tomorrow morning at church, so we’ll have to see what God has in store for tomorrow!

Praise be to God who powerfully works through our weakness for his glory!
Read more . . .