On Thursday, our mission team was sent out to different shopping centres in Liverpool to ask shop assistants how we could be praying for them. Further, to invite them to a community BBQ at the church this Saturday, and to offer copies of the Gospel of Luke in various languages. Adam Johnson and I went to a small shopping strip at Lurnea. We had some trepidation but had a nourishing experience with 10 interactions, including two customers.

The most fulfilling and proactive was with a young Catholic lady in a pharmacy. Although born in Australia, her parents were from Vietnam, one Catholic, and the other a Buddhist. We mentioned we were from Moore College on mission week, and she asked if the Wollondilly Anglican School at Tahmoor was a good school, as her friend wanted to send her boy there? My granddaughter goes there, and I replied that our family were happy with the school. Our prayers for her were that the young boy would get a good education and that friends of hers, that had a flooded house at Windsor, who couldn’t insure due to it being flood-prone, could receive comfort.

The other religions represented in our discussions were Muslim and Mandaean, and nationalities included Vietnamese, Lebanese and Cambodian. One young Muslim man, unloading a truck, asked if we were Jehovah Witnesses. We told him we were from the local Anglican church, and we had an amicable short discussion. We gave out BBQ invite coupons to all and a couple of the Luke books. 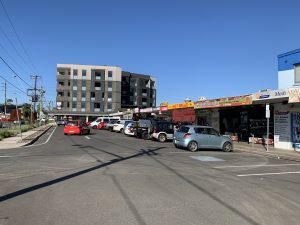 In a bakery staffed by Cambodians, we were not getting any positive response initially. However, an Australian women customer said, “It costs nothing to accept a prayer, like a smile costs nothing, so you ladies should accept.” Further, this lady asked could we pray for her bad health and the health of her family? The assistants then agreed that we could pray for the prosperity of their business. The Australian women was a great ice breaker, and we prayed for them all.

After lunch we did house door knocking, Stuart Sharry was my partner now, again the response was not negative, with some good conversations, including an Anglican who said he hadn’t returned to church since the virus, so he would consider the BBQ. Among others, two Muslims and another Mandaean. More BBQ invites and Luke books were distributed. A good and spiritual day was had by all.
Read more . . .