A century of ‘Societas’

A four-page newsletter, produced in 1919 with a few short articles and news items, was the start of a College tradition which continues today. Now an annual yearbook with substantial feature articles, the College’s magazine Societas has documented student life and provided an opportunity for students to have an article published.

The name Societas is the Latin word for fellowship, and is taken from the phrase Floreat Societas – “may the fellowship flourish”.

“The students of Moore Theological College, feeling the need of an official organ, decided to enter into the literary world, of course, in a modest way. So it was determined a College “sheet” should be issued once a term.” (Societas 1919)

The initiative was praised by the Dean of Sydney, A.E. Talbot, as ‘a sure sign of progress, for it is the outcome of a growing esprit de corps, whilst it emphasizes the corporate character of student life and constitutes a new bond of fellowship’

Throughout the 1920s it was published once a term, with Lent (or Easter), Trinity and Michaelmas issues. Until the late 1990s it was the responsibility of a committee of students, members of the Student Union, who took on the substantial task of arranging content, advertising, printing and distribution.

In its early years, Societas was produced primarily for the students, by the students. The inclusion of inside jokes, now rather unintelligible, indicates the close friendships of a tight knit community. 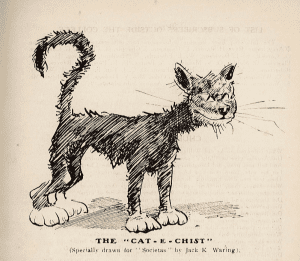 College sports were taken very seriously, with various competitions recorded in detail from the 1920s until the late 90s, including results of competitions played with other theological colleges. The Newman Cup, a tennis competition among Protestant theological colleges, featured a perpetual trophy as its prize. The trophy was donated by Mr C. Newman of Strathfield, and remains in the custody of the Samuel Marsden Archives.

Societas documented student involvement with national organisations including the Australian Student Christian Movement and the Church of England Mens’ Society.

It also provided valuable insights into the work of the Women’s Auxiliary, which organized regular fundraising events with the aim of improving the furnishings in the College’s buildings.

Poetry was a regular feature, although the contributions were often anonymous. Lecturer and poet Bruce Smith, who died in 2001, inspired the Annual Bruce Smith Poetry Competition.

For several years in the 1970s, Societas was published in conjunction with the Deaconess House magazine Koinonia (the Greek word for fellowship).

In providing a Who’s Who of students and lecturers, Societas has proved an invaluable resource to anyone seeking information on a family member who studied here, or for general information on College life. It provided a summary of each student’s academic career as well as details of graduation. In its current format, Societas lists the students of each year group with a photograph and brief description of their families, interest and aspirations.

Its reflection of the College community may be found in the words of Principal D.J. Davies, writing in Societas 1919:

‘The college as a societas is a much wider body than the men who are actually residing in it or attending lectures in its classrooms. It includes all those who have gone through it in former years and are now at work in foreign mission fields, and in the home land, in country or city, in conspicuous dignity or obscure humility. But wherever they are, they are still “the college,” “the societas,” and this fellowship continues beyond the veil that death draws over life. There are those who have gone before as well as those who remain, and they are all in the same fellowship. Thus the college epitomizes the Church, which is the Body of Christ, the instrument of His will, and the family of God.’

At least one issue from 1919 is missing from the College’s collection, but all other issues have been digitized and can be downloaded from Myrrh.