Moore College’s Newtown campus contains a number of contrasting architectural styles, ranging from the late Victorian red brick building into which the College moved from Liverpool in 1891, to the sleek sandstone and glass of the new Library & Administration building. But one of the most striking buildings, which may well catch your eye as you come up Carillon Avenue, is the Cash Chapel, built in the style of the chapel at King’s College, Cambridge. 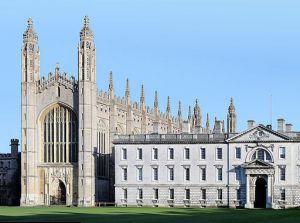 Properly named the John Francis Cash Memorial Chapel, the 88-seat chapel has long been too small to house the entire student body. Yet it remains a highly significant part of the College’s history, being not only a consecrated chapel, but also a war memorial and the tangible expression of a family’s grief. 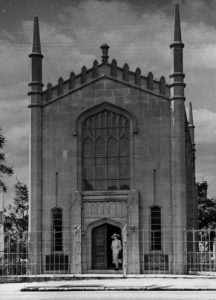 The Cash Chapel with Mrs Elizabeth Cash standing in the doorway

John Francis Cash never studied at Moore College. His father, Rev. E.F.N. (Frank) Cash, was the Rector of Christ Church Lavender Bay and the Registrar of the Australian College of Theology, of which Moore College was then a member. He and his wife Elizabeth had four children, John, Elizabeth, Mary and Miriam. John was born in 1920, attended North Sydney Boys’ High School, then worked for a short time at the Commonwealth Bank. He enlisted in the Air Force on September 4th, 1939, rising to the rank of Sergeant by 1941. His plane was shot down over the Mediterranean, 3 miles north of Ras Beddud in the Tubruq region of Libya, on 16th August 1941. 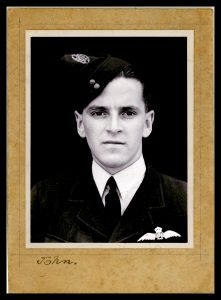 John Francis Cash in uniform, 1940. Photographed by his father.

Frank and Elizabeth were devastated by the loss of their only son, and wanted to commemorate his sacrifice in the service of his country, “as an inspiration to young men of the future”. They initially thought of founding a lectureship at the University of Sydney, however in August 1942 Moore College set up an appeal for funds to construct a new chapel. The previous chapel, the Bishop Broughton Memorial Chapel, was in a dilapidated state. The appeal was aiming for a total sum of £3,000 (approx. $22,400 in today’s money), and Rev & Mrs Cash decided to pay the entire sum. They added £4,000 in 1944, and a brick chapel was planned.

An unexpected inheritance allowed them to make the plans much grander. Solicitors in Dublin contacted Frank to inform him that he was the heir to the estate of Colonel E.F. Cash. Initially the estate was entailed (i.e. Frank could only receive the income), but further legal wrangling brought about a court ruling that Frank was the outright owner of his ancestral estate in Ireland. The subsequent sale of this estate funded the construction of the chapel in its present form. The Hawkesbury sandstone of the exterior walls, and the maple wood in the interior, were donated by William Grant, from the building company Messrs John Grant & Sons, who had also lost a son in the war. The two stained glass windows, depicting the Sermon on the Mount, and the angel at the tomb, were donated by John’s sisters Elizabeth, Miriam and Mary. A further payment from the Cash estate in Ireland funded the creation of the gold communion vessels, and a silver flagon inscribed: The golden Vessels of the Memorial Chapel are the Gift of Elizabeth Cash The Mother of the Airman, John Francis Cash, 16th August, 1948.  These communion vessels are still used for Holy Communion services held in the Chapel for special College alumni events. 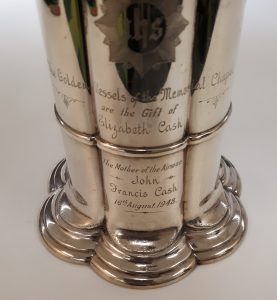 The Cash Chapel also commemorates another tragic death of a young man – Charles Christopher Godden, who studied at Moore College under Nathaniel Jones, then went to New Hebrides (Vanuatu) as a missionary, where he was murdered in 1906 by a local man who had returned there after being ‘blackbirded’, or forced into slavery in Queensland. 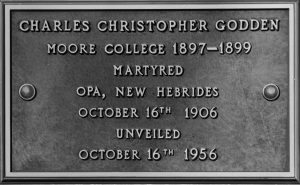 Memorial plaque for C.C. Godden, inside the Cash Chapel

The Chapel was opened in July 1950 by the Governor-General Sir William McKell, and consecrated in November that same year by the Archbishop of Canterbury, the Most Rev Geoffrey Fisher, during his visit to Sydney. 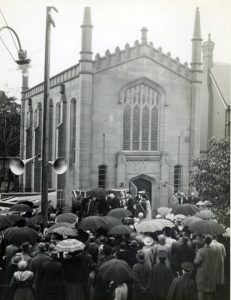 John Francis Cash was the first Sydney civilian to volunteer for the RAAF after the outbreak of World War 2, and the chapel built in his memory may be considered to honour the memory of all the young Australian men killed in that conflict but have no grave or other memorial. It is also the resting place of the ashes of several other members of the Cash family.

An exhibition of items related to the chapel is now on display in the Donald Robinson Library. For information relating to Library access, click here to go to the Library website.