Books of the Reformation

The rare book collection in the Donald Robinson Library contains many works printed during the Reformation. One of the earliest translations of the Bible into English was that of William Tyndale. Our 1550 copy was printed in London during the short reign of Edward VI, when the printing of English Bibles was permitted. It is well protected by a modern binding in red leather. A year earlier in 1549, Thomas Cranmer compiled the first Book of Common Prayer, and several more editions were produced until the standard version of 1662 after the restoration of the monarchy. The Croft Collection of Books of Common Prayer, collected by Rev. Warren Croft, contains one prayer book from the reign of every English monarch since Edward VI.
Cranmer’s first full-length book was A defence of the true and catholike doctrine of the sacrament of the body and blood of our saviour Christ, which was printed in London in 1550. Our first edition of this work is bound in vellum and shows the typesetting custom of the time – the text in Gothic type with scripture quotations in Italic. Cranmer’s fellow reformer Hugh Latimer wrote many sermons which were collated and published in 1571, 16 years after his death at the stake, under the title Frutefull sermons preached by the right reuerend father, and constant Martyr of Iesus Christ M. Hugh Latimer. 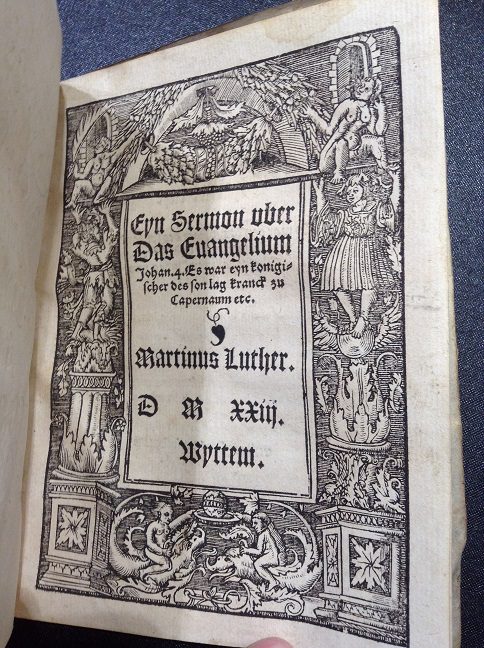 Of the European reformers, the library holds early works of some of the best-known. Luther’s commentary on Galatians was translated into English and printed in London in 1580. Unfortunately, the top of the text has been cut off when one of the book’s previous owners had it rebound. This used to be common practice for rebinding early works. Headings or annotations in many of our books have unfortunately been cut off when the pages were trimmed to fit the new binding.
Our copy of Calvin’s Institutes was donated to the library last year. It is believed to be the 1562 edition of the first English translation, although unfortunately the title page is missing. As with Luther’s commentary, the ascension to the throne of the Protestant Queen Elizabeth I allowed English translations of the continental reformers to be printed openly in England. In some of the margins of this work, an early owner has drawn little hands – they are called manicules and were a common annotation made by 16th and 17th century readers. However, these manicules are pointing away from the text!
The library also holds two works which pre-date the Reformation – Augustine’s City of God published in 1473, and St Jerome’s Epistles, published in 1497.