More than a hundred years ago, Broughton Knox, Principal of Moore College from 1959 until 1985 and one of the most influential figures in the history of the Diocese, was born. 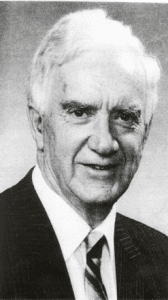 He was a man loved by many and yet he deeply irritated others. For forty years he was a dominant force in the Diocese of Sydney, shaping generations of clergy and impacting the core convictions of the diocese. He shaped its theological college, Moore College, into a modern institution capable of making a significant contribution on the world stage. Then, after retiring from a record principalship of the College in 1985, he accepted an invitation to found another college in South Africa, George Whitefield College, which today is playing a strategic role in equipping the burgeoning churches on that vast continent. What was it that animated Broughton Knox throughout his ministry and his life as a disciple of Christ?

David Broughton Knox was born on Boxing Day in 1916. His father, who had trained at Moore College under Nathaniel Jones in the late 1890s and was ordained in the Diocese of Sydney in 1899, was serving at the time as Rector of St Luke’s Adelaide. He would return to Sydney with his young family in 1922 to become Rector successively of St Michael’s Wollongong, St Paul’s Chatswood, and Christ Church Gladesville. So Broughton grew up in a ministry home and one which reflected the conservative evangelical character of the diocese. Yet a quarrel between his father and T. C. Hammond meant that when the time came for Broughton to undertake theological education, he was sent, not to Moore College, but instead to St John’s Hall, Highbury in London.
After ordination in England, parish ministry in the university city of Cambridge and service in the Second World War, including being involved in the D Day landings, Broughton travelled back to Sydney to serve as a tutor at Moore College from 1947. He continued in this role until he left for doctoral studies in Oxford in November 1950. When he returned, in January 1954, he took up the responsibilities of Vice Principal under Marcus Loane and, after Marcus became an assistant bishop in the diocese, he became Principal in 1959. He would serve as Principal for twenty-six years. Throughout that time he was active in the life of the diocese, earning wide respect, even if his pertinacity on matters of policy and biblical principle frustrated some. Then came retirement, which involved, as we have seen, a new adventure in South Africa.

Broughton had an extraordinarily fertile and flexible mind. He was well-read, but his chief text was always the Bible itself. His theology could certainly be described as reformed, with an emphasis on the sovereignty of God in all aspects of creation and redemption. Yet he was never imprisoned within any particular theological ‘system’. He was well aware of the patristic and reformation debates and was familiar with many of the primary sources. He was perhaps a little less familiar with modern theology but he was by no means unaware of its key issues and personalities. However, as far as Broughton was concerned, there was little point in being an Augustinian or a Calvinist or a Cranmerian or a Warfieldian or a Barthian. He was convinced that God’s people are fed and nourished by God himself through his word and this conviction was reflected in the way he taught doctrine and encouraged others to teach doctrine. Our doctrine must be biblical doctrine first and foremost, and that means that the long history of conversation about the doctrine of the Bible, though significant, must remain in the background as a servant of the primary task.

For Broughton, the central subject and concern of the Bible is God and so the study of the Bible cannot rest content with mere grammatical, historical or literary analysis. He understood that the Bible points beyond itself to direct our attention to the God whose written word it is. So the goal of serious engagement with the Bible is an advance in the knowledge of God, with knowledge understood in its fullest sense to include trust and relationship rather than simply intellectual enlightenment. It was no surprise then when Broughton chose as the subject of his public lecture series in 1979 ‘The Everlasting God’. The lectures were later published (Evangelical Press, 1982) and continue to stimulate fresh thinking about God and his purposes nearly forty years later.

There were at least two remarkable consequences of this confidence in the written word of God as the sure means of our knowledge of God. The first is the freedom it gave him in theological discussion. In stark contrast to the caricature of him drawn by some, Broughton’s commitment to the Bible did not lead to him being reactionary or obscurantist but fostered a creativity of mind that was genuinely radical. He felt free to explore any issue from first principles. He was quite happy to ask probing questions of even the most venerable positions. He also expected God’s truth to make sense of the world as we encounter it and so he could appeal to human experience in support of an argument he grounded in Scripture. He felt no need to censor dissent or restrict reading to acceptable orthodox texts. There was, in short, a relaxed confidence in his approach to theological questions, to the point of playfulness at times. He could be both tenacious in argument and impishly contrarian, though he could be extraordinarily generous as well. One of his colleagues remembers that he approached Broughton with some concern because they differed on a particular doctrine. He was greeted with warm generosity of spirit and encouraged ‘You must of course teach what you believe the Bible is saying’.

A second consequence was that Broughton was always ready to re-examine issues in the light of Scripture and to change his mind if he became persuaded there was a better way to understand or explain what God had revealed of himself and his purposes. This could be infuriating for those charged with producing the correspondence course notes to which he contributed. He kept revising and rearranging his material and new sets of notes needed to be printed! Those who taught alongside him have remarked that he could argue a case one day only to argue the opposite point of view the next day. Yet it was not because he was indecisive. Nor was it simply a result of his love of constructing and prosecuting an argument. Instead, it was because he was convinced that true discipleship involved a willingness to follow and be corrected by the word which God has given to us.

Broughton’s teaching method has often been described as ‘Socratic’. He would invite questions and then respond with questions of his own. The goal was to develop critical thinking and enable the student to trace the consequences of positions taken (though he rarely if ever explained what he was doing). Sometimes he would take an outrageous position in order to provoke questions, debate and clarity in argument. Some students thrived in such an environment, their imaginations fired by the challenge to explain their position and why they held it. Others were less enthusiastic and felt intimidated by his questions. Yet those who revere Broughton even now remember those question times.

As much, though, as Broughton loved theological debate and the opportunity to teach, we have only just touched upon what animated him. His fundamental preoccupation was with God himself. All of life is directed by the person, nature and purpose of God. It is because God eternally exists in loving relationship or personal fellowship as Father, Son and Spirit that relationships or fellowship remain basic in human experience and in Christian discipleship and ministry. God’s eternal fellowship opens up to include a fellowship between his redeemed creatures which must have a priority among us (see 1 John 1.3). I remember his suggested amendment of the Westminster Shorter Catechism: ‘The chief end of man is to glorify God and enjoy him in the fellowship of his people forever’. Our capacity for fellowship is where we are most like God. It matters.

Broughton was in some regards a child of his times and in others a visionary of the future. His personal piety was rich and deep and nurtured by prayer and his almost constant reading of the Bible. He stood firmly against ostentation or legalism and was appalled by vulgarity and license. Intensely shy, he nevertheless gave himself to others in service and was bold and immoveable when it came to biblical principle. He was a child of a protestant ascendancy who could rely on considerable common ground with his hearers in the wider community. Yet his financial acumen, his thoughtful principled pragmatism, and his unwavering commitment to the best possible theological education which shaped the entire person and readied them for the service of God’s people in a ministry of prayer and the word, was responsible for the modern Moore College. Its full-time four year residential program, its marriage of high academic standards with practical ministry training, and its persistent appeal to Scripture in every subject area and at every level, was all creatively shaped and tenaciously defended by him. But above everything else Broughton was one redeemed by God through Christ and who knew that life is not about reputations or personal empires or influence, but about knowing God, genuinely knowing God, and making him known.