Dorothea Mackellar was born in Point Piper in 1885, the daughter of doctor and NSW senator Sir Charles Mackellar and his wife Marion. Although she spent most of her life in Sydney, Dorothea’s poetry and prose was greatly inspired by the time she spent on her brothers farms near Gunnedah, NSW. Her most well-known work is the poem My Country, written in England when she was only 19, and published in the London Spectator in 1908. Now an iconic Australian poem, it expresses a deep love for the natural landscapes of Australia and the growing patriotism of the new Commonwealth which made the poem so popular during and after World War 1. She also wrote several novels, and was involved in the Sydney Bush Book Club, as well as being a founding member, along with Ethel Turner and Mary Gilmore, of Sydney PEN (Publishers, Editors and Novelists). She was awarded the OBE in 1968 for her contribution to literature, and died in a nursing home in Randwick several weeks later, having suffered ill health for many years. She is buried in Waverley Cemetery. 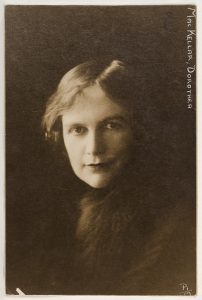 Dorothea was tutored at home but also attended lectures at Sydney University. She had a keen interest in the arts and politics, particularly after Australian women were given the vote in 1902.

The Dorothea Mackellar Poetry Award for school students is given annually in her honour, and a Mackellar Centre in Gunnedah is currently being planned.

The manuscript notebook containing My Country is held by the State Library of NSW.

Moore College library holds several books which belonged to Dorothea Mackellar, including poems by John Gay and Alexander Pope, Tacitus’ Historical Works and the works of Benjamin Franklin. Pictured below is ‘The life of Cardinal Wolsey’ with her signature on the fly-leaf: