Lady Darling was born Elizabeth Dumaresq in Staffordshire in 1798. Descended from a prominent Jersey family, she married Major-General Ralph Darling in 1817. He was acting governor of Mauritius from 1819-1823, then Governor of New South Wales from 1825-1831, where he gave his name to a major river, several Sydney suburbs and Darling Harbour. Eliza’s brothers Henry and William John Dumaresq also emigrated to the colony and established a number of pastoral properties, including Saumarez Homestead near Armidale, NSW.

Eliza was founder and Patroness of the Female School of Industry, she helped the inmates of the Female Factory in Parramatta and patronised the Benevolent Society*. In 1826 she also founded the Female Friendly Society. Her concerns for the plight of women in prison and in straitened circumstances stemmed firstly from her evangelical faith but also from her association with the Quaker prison reformer Elizabeth Fry, who also corresponded with Jane, Lady Franklin, regarding the welfare of female convicts in Tasmania^.

The Female School of Industry took in girls aged 4-7, trained them in domestic service and then sent them out to work when they reached 12-14 years. It was located in Macquarie St, then later moved to Darlinghurst and finally to Petersham, before it was closed in 1926**. Eliza wrote a handbook for the students entitled Simple rules for the guidance of persons in humble life: more particularly for young girls going out to service, published in Sydney in 1837. An online version of this work is available through the National Library.

Her second book The young Christian’s Sunday mornings, held in Moore College Library, was published in 1843 after the Darling family had returned to England. Eliza was a devoted mother to four girls and three boys (another three children did not survive infancy), and this work takes the form of conversations between a mother and her child regarding proper behaviour in church and the meaning of the Anglican liturgy. It is affectionately dedicated to Eliza’s own mother. 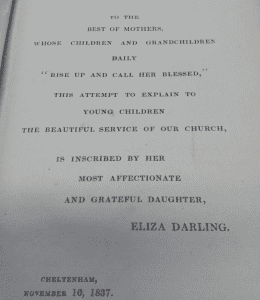 Eliza was also an artist and amateur architect. Several watercolours of Sydney landscapes are held by the State Library of NSW, while others, produced for charity sales, have not survived. Sir Ralph organised an architectural competition in 1827 in order to solicit designs for a new Government House, and Eliza’s plans are reputed to have won. However, they were too extravagant and received no funding from the British Government*. The existing Gothic revival building was designed by the royal architect Edward Blore^^.

Eliza died at Hartfield, East Sussex in 1868. Mount Eliza in Western Australia is named in her honour.