HomeResourcesFrom Ireland to Australia and back again: the influence of T.C. Hammond

From Ireland to Australia and back again: the influence of T.C. Hammond

Thomas Chatterton Hammond (1877-1961) was born in Cork and educated at Trinity College Dublin. He was ordained priest in the Church of Ireland in 1905. From 1910-1919 he was Rector of St Kevin’s Church, Dublin, then was appointed Superintendent of the Irish Church Mission. In 1936 he was appointed Principal of Moore College (until 1953) and Rector of St Philip’s Church, York St (until 1961). He also held several positions in the Loyal Orange Institution of NSW, including Grand Master (1961).

When Hammond was appointed Principal, Archbishop Mowll told the Diocese of Sydney Synod that:

“by his (Hammond’s) writings and by his addresses at clerical and student gatherings in England he has long been held in repute as an outstanding teacher.”[1]

One of his most enduring legacies as Moore College Principal was the introduction of the evening course known as the Preliminary Theological Certificate (PTC), now an online and correspondence course used to build student’s understanding and appreciation of the biblical, theological and historical foundations of the Christian faith. He also steered the College through the war years and oversaw the construction of the Cash Memorial Chapel.

In his Centenary History of Moore Theological College, Marcus Loane described Hammond as:

The Moore College Donald Robinson Library currently has a display called ‘The Irish influence on Sydney Protestants’, featuring items from T.C. Hammond’s archives as well as other Irish clergy. 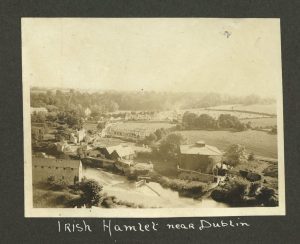 Some of the items on display in the Library

Hammond’s legacy in Ireland lives on in the work of the Irish Church Mission (ICM), continuing the work of evangelising the island of Ireland it began 170 years ago. ICM is pioneering new and strengthening old churches in Ireland, where a mere 1.5% of the population are evangelical Christians.

“We are grief-stricken by the famine of the gospel in Ireland, but convinced that Jesus, the water and bread of life, is the solution!” says ex-Sydneysider, Cameron Jones who is now a Pioneer Evangelist with ICM.

ICM plans to plant 10 churches in Dublin the coming decade as a base for reaching through the rest of the island. Gafcon Ireland shares this gospel passion, seeking to Proclaim, Partner, Plant and Prepare people for gospel work. This month, Moore College Principal, the Rev Dr Mark Thompson, is contributing personally to this ongoing relationship between Sydney and Ireland as the lecturer for Gafcon Ireland’s “TheologyIreland” initiative.

Eddie Coulter, a previous ICM Superintendent, has written about Hammond’s work in both Ireland and Sydney in his publication ‘Origins’.

“Hammond helped reset the firm evangelical foundations which have been characteristic of Anglican witness in this diocese. We are all indebted to him and to ICM as a result.”