Margaret Jessie Steel was born in Scotland in 1883 and attended the prestigious George Watson’s Ladies’ College in Edinburgh. She then enrolled at the University of Edinburgh and completed a Master of Arts. After several tutoring appointments, including Kirkhill Public School and Orford Hall Training College in Warrington, Cheshire, she became tutor at the University College of Southampton. She lectured not only in her primary subjects of education, logic and psychology, but also taught needlework and divinity. Additionally, Margaret gave regular public lectures at Workers’ Educational Associations, Women’s Institutes and Mothers’ Union groups throughout the south of England.

In 1933, Margaret undertook the gruelling study necessary to pass the Archbishop of Canterbury’s Lambeth Diploma in Theology. This Diploma was instituted in 1905, to encourage women to study theology and enable them to teach Religious Education.* 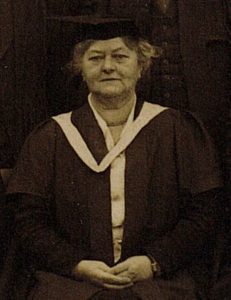 Margaret emigrated to Australia in 1938, where she took up the post of Headmistress of the Sydney Church of England Girls’ Grammar School (SCEGGS) in Moss Vale, NSW. She resigned in 1943 due to illness, and moved to Sydney. The following year she was appointed Lecturer in Psychology at Sydney University.

Moore Theological College appointed her tutor in the University Entrance exam, which was a necessary requirement for admission. Since the Deaconess Institution was a separate body at the time, Margaret was the first woman on Moore College’s teaching staff. Many aspiring clergymen were only as young as 20 when they applied to attend Moore, and Margaret’s role was to prepare these young men for the academic rigours of the Licentiate in Theology program.

After her resignation in 1951, she did some temporary teaching at Trinity Grammar School, and lectured in the Teacher Training Course run by the Teachers’ Guild of NSW, until 1956. Margaret died in 1963.

Margaret’s many friends and colleagues had nothing but the highest praise for her, which can be seen in the many testimonials and personal letters which make up the bulk of her small archival collection. Rev. Ken Leask, later Rector of Holy Trinity Dulwich Hill, wrote to her in 1954: “As I look back to the ‘Old Matric’ it seems so very far behind now, and yet whenever I feel the need of encouragement for the job in hand I take a look back – and then go forward. You will never know, this side of Eternity, the great benefit that your ministry has been to so many of us. There are at least five of us who feel that you pulled us over ‘the shadow line’. “Miss Steel, this is deadly”, was the comment, but deadly or not as the Matric course was, the sting was taken out of it by the benign influence of our St Margaret.”**

SCEGGS student Laurel Waters wrote: “I feel that I owe you all in my character that is good – since it was under your influence that I began to form opinions and ideals of my own.”**

A fellow lecturer at University College Southampton described her thus: “Her lectures in Logic and Psychology have been of great service to my own work and of lasting benefit to both our men and women students. She keeps a young heart, an open mind and a wise judgement in all things. Immensely popular with students, she makes innumerable friends and no enemies.”**

And the Moore College Committee recorded their appreciation in the minutes of November 16th, 1951: “Her unsparing attention to the details of her work and her personal influence on the students have won the regard and esteem of all those acquainted with her work.”**

Although her time at Moore College was short, she had a lasting positive impact on all of the students she taught, both academically and personally. Her small collection of personal papers shows her to be a highly intelligent, ambitious woman who used her intellectual powers for good.

*The Archbishop’s Examination in Theology (2017) Retrieved from: http://aet-lambeth.org/