The personal papers and books of Rev Donald Howard demonstrate a life full of dedicated ministry and deep thought on a range of topics. Rev Mr. Howard studied at Moore in the early 1960s and served as curate in several churches in Sydney and the UK, before his appointment as Rector of St Peter’s Burwood East in 1976. In 1978, he became Assistant Missioner at the Diocese of Sydney’s Department of Evangelism, then served as Rector of Lugarno from 1983 until his retirement in 1992. His first wife Diana died of cancer in 1977, leading Donald to write ‘Christians Grieve Too’. Donald’s second wife Nan passed away in 2022. 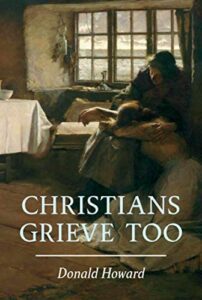 Rev Howard is possibly best known for his work on death and grief, with his short work ‘Christians grieve too’ published in 1979, and ‘Burial or cremation: does it matter?’ in 2001. The file on grief in his papers contains many letters from readers expressing appreciation for ‘Christians grieve too’ and its sensitive handling of a difficult topic. Even before Mrs Howard’s death in 1977, Donald was thinking deeply on this subject: his deacon’s essay in 1965 focused on the topic ‘The Old Testament concept of life after death’. Another file contains sermons and notes on stillbirth and the death of infants.

Marriage, family and parenting is another key topic in this collection, with books such as ‘Christian marriage in crisis’ by David Phypers and ‘Why can’t I understand my kids? Bridging the generation gap’ by Herbert Wagemaker. Donald also wrote on this topic, authoring ‘The family: here today, gone tomorrow’ in 1975 and a sequel ‘The family: the father’s plan’ in 2021. He also preached on the family: ‘So children and parents stand together before the cross of Calvary, and rejoice that they are accepted – not on their own efforts, but on the finished work of Christ.’ (undated sermon notes).

Donald is also well known as the author of ‘Preach or perish: reaching the hearts and minds of the world today’ and produced the evangelistic cassette series ‘Sharing the gospel’ through the Department of Evangelism in 1983. These cassettes were very popular and sold out within a month of publication. His papers contain numerous files of notes on the topic of preaching, as well as an extensive series of expository sermon notes which cover almost every book of the Bible. In 1992, he addressed the Diocese of Sydney’s College of Preachers on ‘The gospel we preach’ – “Permanently valid and universally applicable, the gospel goes forth to the end: the official, victorious, triumphant announcement that Jesus Christ is King.”

The importance of Sunday as a day of rest as well as church attendance, was an issue that Rev Howard felt strongly about. His books include several works published by the British organisation Lord’s Day Observance Society, including ‘The Lord’s Day: 100 leaders speak out’ and J.C. Ryle’s pamphlet ‘A day to keep’. From his file on this topic, Donald preached a sermon called ‘Sunday’: “after the resurrection, Christians came to observe the first day, so acknowledging the climax of creation and redemption upon the day that Jesus rose from the dead. For us, the Lord’s Day should be the most enjoyable of the week: an opportunity to celebrate the blessings of new life in Christ secured for us on that day.”

The concept of Sabbath in Scripture follows the example of God resting on the seventh day after creating the universe. The related topic of creationism – the interpretation of Genesis 1 as a historical event which proves the existence of God – is also prominent in this collection, with books such as ’15 reasons to take Genesis as history’ by Don Batten, and Lee Strobel’s ‘The case for a creator’.

Beyond the theological sphere, Rev Howard had a keen interest in the history of the Macarthur district, especially Camden. Originally the home of the Tharawal people, this region has a significant colonial history as the estate of British Army officer and merino wool pioneer John Macarthur. Donald subscribed to numerous issues of Camden History (the journal of the Camden Historical Society) between 2001 and 2017, and wrote several short works of local history: ‘Cobbitty’s Finest Hour’ and ‘The hub of Camden: F.C. Whiteman and Sons, 1941-1942’.

Both Donald and Nan have been prolific writers of letters to the editor, mainly The Sydney Morning Herald. Their ability to write concise and pithy responses to the news was well suited to the lively tone of the correspondence pages. Donald kept a file of his published letters to the editor, and they cover a very wide range of topics – the Snowy Mountains scheme, the national anthem, Calvin Coolidge, inter-faith dialogue, the Prince of Wales, the Ten Commandments. He also sent frequent contributions to the Herald’s Column 8.

Rev Howard’s collection provides an overview of the life and work of a parish clergyman with a wide range of interests. It provides a rich resource for researching his theological views, writings, preaching style and contributions to his local community. The books he donated to the Donald Robinson Library can be browsed in the library catalogue, and his papers can be explored via the archives catalogue.