Eusebius Sophronius Hieronymus, or St Jerome as he is more commonly known, was born circa 347 in Stridon, on the border of Dalmatia. His most famous work was the translation of the Bible into Latin – the Vulgate version. He is recognised as a saint and doctor of the church by the Anglican Communion and the Roman Catholic Church, which has also named him patron saint of translators and librarians*.

Moore College Library holds a volume of St Jerome’s letters, printed in Basel in 1497 by Nicolaus Kesler. The original covers and a section of the back pages are missing, although facsimile copies were obtained and inserted when the volume was rebound in brown calf in the 19th century. In the year 1730, the volume was owned by a Thomas Jackson, whose name is inscribed on the title page.

Thomas Jackson may have also annotated the volume – there are copious notes on the first few pages of the work, including this manicule: 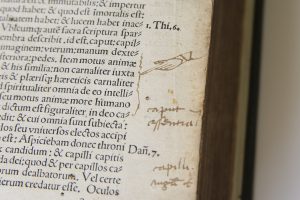 Derived from the Latin word for ‘hand’, manicules were common features of annotations, used to highlight or point out a particular word or passage. 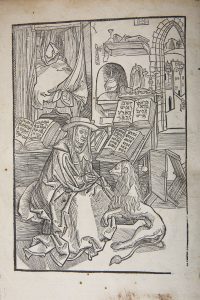 Due to an apocryphal story about Jerome curing a lion in the wilderness by pulling a thorn out of its paw, St Jerome is frequently depicted with a lion in art. In this woodcut illustration by the German artist Albrecht Durer (1471-1528), St Jerome is helping the lion inside his study. The three open books in the background show Genesis 1:1 in Latin, Greek and Hebrew. Jerome is wearing the hat of a Roman cardinal, although he never held this office. 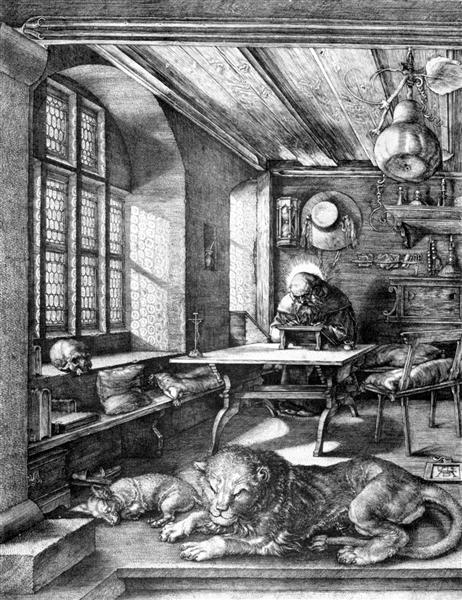 Durer revisited St Jerome as the topic of a later artwork with this 1514 copperplate engraving. This image features the addition of a skull on the windowsill as a memento mori symbol.