HomeResourcesThe Latimer Collection and its provenance

The Latimer Collection and its provenance

In 2020 the Donald Robinson Library was privileged to receive a generous donation of 16th-18th century theological books from Latimer Trust in the UK. They now reside in the rare book room, and are known as the Latimer Collection. Bookplates and marginalia in many of these works indicate that they originally belonged to one of three main sources: Rev Jonathan Scott of Wollerton in Shropshire, the London College of Divinity and George Stokes, co-founder of the Parker Society. Each of these provenances demonstrates significant connections with the history of Evangelicalism in Britain.

Jonathan Scott, was an independent minister who established Congregational churches across the west of England in the late 18th century. He was closely connected to Willielma Campbell, Viscountess Glenorchy, a Calvinistic Methodist and financer of evangelistic work.

Scott started his career in the Army, rising to the rank of captain-lieutenant in the 7th regiment of dragoons. He was converted by the preaching of William Romaine, at a service held in one of the churches established by the Countess of Huntingdon, another wealthy patroness of evangelism. Scott began preaching and trying to convert his fellow soldiers. After facing pressure from his superior officers to choose between preaching and his military career, he resigned his commission in 1769. He was ordained as a ‘presbyter at large’ in Lancashire in 1776.

During the 1780s, Scott established a partnership with Viscountess Glenorchy, a wealthy widow who funded the construction of chapels to support ministers of whom she approved. She also left a substantial legacy to the Society for Promoting Christian Knowledge to help support schools. Like her contemporary and acquaintance Lady Huntingdon, she had an association with John Wesley but favoured Calvinist theology over his Arminianism. She also financed training for ministers and support for underpaid ministers, with Scott acting as her agent. Upon her death in 1786, she left Scott £5,000 and her chapel & house at Matlock, into which he moved in 1794.

Scott married Elizabeth Cley in 1768, the heiress of Wollerton in Shropshire. This became the base from which he established numerous Congregational churches in Shropshire, Staffordshire, Cheshire and Lancashire. 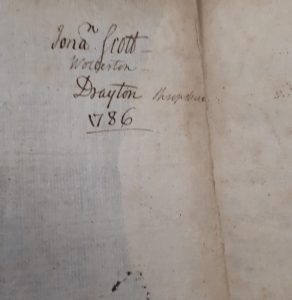 The London College of Divinity was founded in 1863 as a theological college for evangelical men who wanted to be ordained but lacked the educational requirements to enter university. Its establishment was funded by the Rev Alfred Peache and his sister Kezia Peache, who each inherited half of the estate of their father, a wealthy businessman. They gave a total of £100,000 to the College, which was located first at Kilburn, London, then at Highbury from 1866-1940. By 1900 the College had trained over 700 men for Anglican ministry. It had close ties with Evangelical organisations such as the Church Pastoral Aid Society. In 1970 the College moved to Nottingham, ending its connection with London University, and was re-named St John’s College. It closed in 2019 as a result of financial constraints. One of its principals was Donald Coggan, later Archbishop of Canterbury. Significantly for Moore College, another alumnus was D. Broughton Knox, who studied there from 1939-1941, on the advice of Marcus Loane, who commended the high standard of the London University Bachelor of Divinity course it offered. 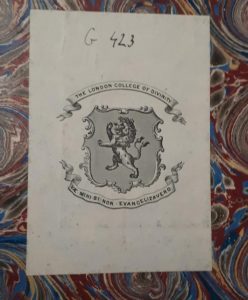 The Parker Society was formed in response to the growth of Anglo-Catholic influences in the early 19th century Church of England, notably the Tractarian movement. It was founded in 1840, and named after the Elizabethan Archbishop of Canterbury Matthew Parker, who was ‘a great collector of ancient and modern writings’. In 1826, Henry Budd, the Rector of White Roothing in Essex wrote “Let the works of the Reformers be prest [sic] on the attention of the public”. This inspired the publication of an 8-volume set of John Foxe’s Actes and Monuments, between 1837 and 1841. George Stokes, a Colchester merchant and member of the Committee of the Religious Tract Society, took on the work of setting up the Parker Society and sending out prospectuses via the Uniform Penny Post, an innovation of 1840 which made postage within England much more affordable. The Society’s President was the well-known philanthropist Lord Shaftesbury. The Parker Society volumes were published by Cambridge University Press under the supervision of James Scholefield, Professor of Greek and previously curate to Charles Simeon, and Frederick Gell, Fellow of Christ’s College and later Bishop of Madras. The Donald Robinson Library holds a full set of the Parker Society volumes. George Stokes owned some of the most significant books in the Latimer Collection – 1548 and 1551 editions of Erasmus’ paraphrases of the New Testament. 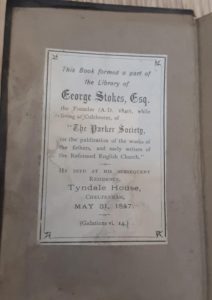 Moore on the Donald Robinson Library