The papers of Lance Shilton, former Dean of Sydney

When Billy Graham’s regular column in the Adelaide Advertiser ceased to be syndicated, the paper asked the rector of Holy Trinity North Terrace to start his own column. Lance Shilton’s Guidelines were published in the Advertiser from 1969 until he left Adelaide in 1973.

He also published a regular column in the Sun Herald, in addition to writing for religious newspapers the Christian Herald and Church Scene. This was in addition to the radio broadcasts which spanned almost his entire career, including Notes on the News – a short commentary on current events. Like his contemporaries Broughton Knox and Bernard Judd, Shilton used print and broadcast media to expand the reach of his message. 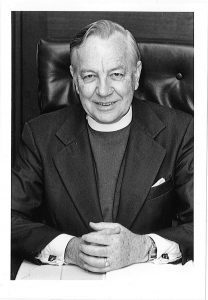 Lance Shilton, when he was Dean of Sydney

Lance Shilton was born in Melbourne in 1921 and was converted at a CMS League of Youth meeting in 1939. After Army service during World War 2, he studied at Ridley College and was ordained in 1949. His first position as Rector was at St Jude’s Carlton. In 1955 he married Joan Smith and two years later they moved to Adelaide where Lance was appointed Rector of Holy Trinity North Terrace, remaining in this parish until 1973. He coordinated regular Bible studies, the outlines of which are included in his collection, and invited his friend Paul White, the Jungle Doctor, to give regular talks.
Lance Shilton’s files reveal his keen interest in and desire to influence key social issues. He collected news clippings and other material on a wide range of topics such as abortion, homosexuality and divorce. In the early 1970s he was instrumental in the formation of Festival of Light, now known as Family Voice Australia.

In 1973 Lance was appointed Dean of St Andrew’s Cathedral in Sydney, also serving as the council chairman of both St Andrew’s Cathedral School and St Catherine’s Waverley. He oversaw a fundraising appeal which provided much needed repairs to the cathedral’s structure and fittings. He authored media releases on a wide range of topics and continued to broadcast radio programs and write newspaper columns, in addition to his regular sermons. The notes for his sermons, which include related supplementary material, have been numbered and indexed, and fill over 30 boxes!

Rev. Shilton’s sermon on the coronation of Queen Elizabeth, 1953

Lance Shilton maintained a keen interest in global evangelism, attending several major international conferences and kept the notes and ephemera from these events. The most well-known conference was the first International Congress on World Evangelization, held in Lausanne in 1974, from which the worldwide Lausanne Movement sprung.

Joan Shilton died of a brain tumour in 1980, and Lance married Mary Powys in 1982. Three years later he was appointed Member of the Order of Australia. He retired as Dean in 1988, and died of cancer in 1998. 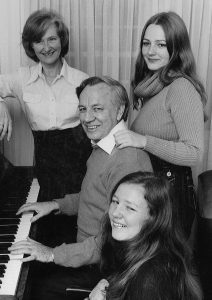 Lance Shilton is surrounded by his wife Joan and daughters Pauline and Andrea, in 1978.

Shilton, Lance. (1997) Speaking out: a life in urban mission. Macquarie Centre, NSW: The Centre for the Study of Australian Christianity.