The oldest existing collection of books, which may be described as a Library, in Australia is the Port Jackson Lending Library. This small collection of commentaries and theological works was given to Rev Samuel Marsden in 1809 by the Associates of Dr Bray, and resided in the Diocesan Library until they were transferred to Moore College in the 1950s. They all have a bookplate inside the front cover, with the words:

“This Book was given, 1809, By the Associates OF THE LATE REV. DR. BRAY, To the Lending Library of Port Jackson In the Colony of New South Wales And Diocese of London Established by the ASSOCIATES, 1809.” 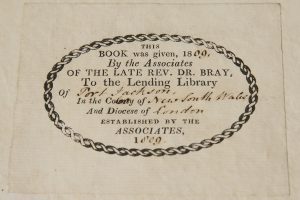 This appears to be a standard bookplate for Bray library books in England, as the printed word “county” has been altered to say “colony”, to suit the Australian context. The colony, as far as the Anglican church was concerned, was considered part of the Diocese of London until the Archdeaconry of New South Wales was established by letters patent in 1824, as part of the Diocese of Calcutta. The Diocese of Australia was formed in 1836, then further subdivision resulted in the formation of the Diocese of Sydney in 1847.

Thomas Bray (1656 or 1658 to 1730) was an Anglican clergyman who helped set up the Society for Promoting Christian Knowledge (SPCK) and Society for the Propagation of the Gospel in Foreign Parts. In 1696 Bray was appointed by the Bishop of London to organize the Church of England in the Colony of Maryland. He accepted the role on the condition that he was given funds to supply the parishes with books, and his 1697 work An Essay Towards Promoting all Necessary and Useful Knowledge, both Divine and Human: In all the Parts of His Majesty’s Dominions, Both at Home and Abroad further outlined this scheme. The project of supplying books to clergy and their churches spread to England and Wales, and led to the establishment of the SPCK. During his lifetime, Bray helped establish 80 libraries in England and Wales, as well as 39 in the colonies. Just before his death, he appointed a group of associates to carry on his work. 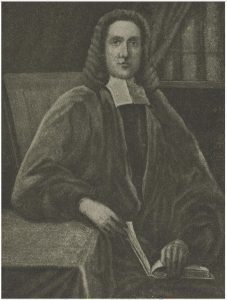 The first printed texts to arrive in Australia were the books brought out by Rev Richard Johnson in the First Fleet in 1788. Of these books, only two are known to have survived: the Bible held by St Philip’s Church in York Street, and the Cruden’s Concordance in Moore College Library. Johnson’s successor as colonial chaplain, Rev Samuel Marsden, advertised during a trip to England in 1809 for books on ‘Divinity and Morals, History, Voyages and Travels, Agriculture in all its branches, Mineralogy and Practical Mechanics’. The only response (that we know of) to this invitation, was the Port Jackson Lending Library collection given by the Associates of Dr Bray.

The titles given to the Port Jackson Lending Library represent a distinctly Anglican choice of reading matter: a selection of Bible commentaries by the Bishop of Ely Simon Patrick (1626-1707); books about the catechism, the Prayer Book and the Thirty-Nine Articles; a variety of published sermons. Most of them are bound in plain calf, and several were second hand when they were given to Marsden, as they carry the bookplates and inscriptions of previous owners. 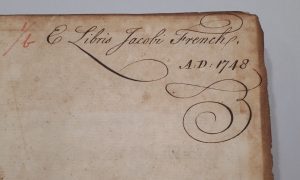 Inscription on the title page of ‘A Discourse concerning the Happiness of Good Men, and the Punishment of the Wicked, in the next world’ by William Sherlock, 1735.

When these books were brought to Sydney by Samuel Marsden in 1810, they were kept at his house and, presumably, were consulted by him and other clergy. The first genuinely public library in Australia, the Australian Subscription Library, was set up in 1826 and is now the State Library of NSW.

State Library of NSW. 2020. History of the Library. https://www.sl.nsw.gov.au/about-library/history-library