The Legacy of David Broughton Knox 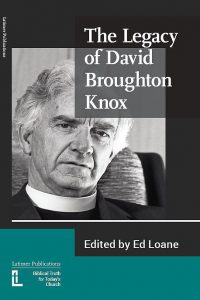 David Broughton Knox was one of the most influential Anglican leaders in the second half of the twentieth century. His long service as principal of Moore Theological College, Sydney, had an impact much further afield than that city. Along with this, the unique place Sydney Diocese has in the Anglican Communion has been significantly shaped by Knox’s ministry and theological priorities.

This volume is the result of a conference held in 2016 to commemorate the hundredth anniversary of Knox’s birth. Theologians who were personally taught by Knox, along with those who belong to a younger generation, contribute to this work by critically engaging with various aspects of Knox’s theology and legacy. Subjects include the atonement, ecclesiology, sacramentology as well as the shaping of a theological institution. These academic contributions are complemented by personal accounts and anecdotes of Knox’s influence on some of the most influential evangelical leaders and academics in the world.